I spent some quality time with the kids a few weeks back, and Adam West.  We all enjoyed 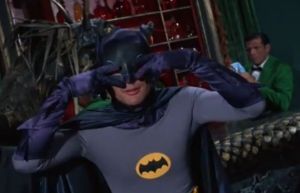 the campiness that is the original 1965 Batman movie. It has the styling of a video game and nary a cross word. Why even the romantic scenes between Adam West and the sultry Lee Meriwether are practically Bollywood worthy.

The Boy Wonder is following the Lady Gaga fashionista mantra of pantslessness. Still in its cheesy mid-60’s Saturday morning cartoon nostalgia I have to note a few instances where this movie is far superior to the other caped crusader offerings. The original Batmobile, in its low-fi nature is the better car, and Geoge Barris’ finest creation.

Frank Gorshen as the Riddler is under-used and makes Jim Carey’s role even more campy by comparison. Caesar Romero as the Joker has a wardrobe that will make a pimp blush.  Burgess Meredith’s Penguin is better than Devito’s by miles. Where Devito went dark, he should have gone with the sarcasm and wit of Mickey in his pre-Rocky days. Top it off with multiple sequences laced with pirate speak and you have a great kids movie. I love the nuanced “skewed” camera angles when the villains are filmed alone together.

It is apparent all the money for this film went to the villains. Better outfits, better actors, and they had a freaking full-on submarine.  However, the ending always seemed a little oft-putting. When the leaders of the UN are reconstituted, they appear in their chairs. What happened to the test tube stands that held their dehydrated selves?